Kurtis Blow is a key figure in Hip Hop’s History. He undoubtedly had talent, but perhaps his most powerful tools proved to be determination, flexibility and personality.  All of this is evident in the steps his career took and whom he was connected with through out it. In 1979, he was chosen as the vocalist for a musical experiment by two Billboard Magazine workers to make a Christmas Rap song.  He gets the gig thanks to the insistence of his persistent hustling manager, a young Russell Simmons. Kurtis Blow is from Harlem, his manager from Queens, and a few years before making records, Kurtis was on hand in the Bronx when Grandmaster Flash found himself in need of a MC when the Furious Five briefly defected to work with DJ Charlie Chase (of The Cold Crush Brothers)*. While recording his first record he worked with legendary Hip Hop Pioneering Producer, Larry Smith and by his second record he was enlisting the talents of David Reeves a.k.a Davy DMX for his musicianship and eventually his DJ Skills.

In this early era of Rap records it was all about the singles and not albums. In fact, most artists didn’t make albums. Kurtis Blow was one of the few, but like the others who did at this time that meant you had a few Rap songs and then the rest of the album was filled with attempts at something R&Bish, love ballads or forays into rock. Kurtis Blow tried it all. I don’t know how much he was singing before records, but he put his effort into it on these records...with mixed results.  He was also apparently paying close attention in the studio to what was happening because he quickly picked up the understanding of how to produce records and when programming Drum Machines hit the scene, Kurtis Blow was there to offer his production skills to a wealth of artists, such as, Run-D.M.C, Fearless Four, Dr Jeckyl and Mr Hyde, Sweet T, Kool Kyle and Billy Bill, Lovebug Starskiand the Fat Boys.

When you look at his career its a rather impressive one. There’s also no doubt that his name is known by a great span of generations, but the knowledge is still somewhat limited. Many know him because every Holiday season “Christmas Rappin” creeps its way back onto some radio programming. Others are aware because his biggest hit, “The Breaks”, is still a great record and gets some love on Urban radio Old School hours and particularly because it’s popular and safe enough that even not-so-hip DJs can throw it on for nostalgia’s sake and earn some cool points. In the inner Hip Hop circle you might catch a DJ spinning “AJ Scratch” or “Basketball”, but I don’t even really hear that quite enough. There’s also the fact that Nas did an updated version of Kurtis Blow’s “If I Ruled The World” in ’96, but I’m not sure if the average younger Nas fans are aware of the origin of the source material.

However, even with those things getting some attention still, there’s a wealth of Kurtis Blow’s catalog that is being overlooked. Far as I can tell, all of his albums are out of print, except the debut. In order to a better sampling of his career the main thing I have been able to find is a “Best Of Kurtis Blow” CD. Although the terms “Best Of…” is always subjective and there is definitely some songs I would have left off of here and there are at least a handful of great options to include that were omitted, this CD is still a great place to start in capturing some of the legacy of Kurtis Blow. The CD is mostly made up of all the tracks I mentioned above so far; “Christmas Rappin”, “The Breaks”, “AJ Scratch”, “Basketball” and”If I Ruled The World”.

The CD also features two other songs from his debut album, “Throughout The Years” and “Hard Times”. “Throughout The Years” was a track I was not expecting to find on here and I had to actually pull all my vinyl to remember what it sounded like, as it’s definitely not a track I listened to back in the day. It’s actually a pretty well written track. It gives a little of his background leading up to his goal of turning his dreams to reality. Its drawback is the overly pretty music that probably did not and does not appeal to the average Hip Hop listener. Run-D.M.C fans might recognize “Hard Times”, not only for their song title of the same name, but also all of the same lyrics. It’s surprising how different the lyrics sound with the harder edge delivery and drum machines of Run-D.M.C than on here with Kurtis Blow, but it’s still a cool track.

Included from the third album is the title track, “Tough” and “Daydreamin”. “Tough” is essentially “The Breaks” part two. Although it lacks the surprise impact of its predecessor, it’s every bit as good of a song, in some ways better. That is, at least partially, because of the more rugged sound of the Roland TR-808 Drum Machine, even without the bass drum not tuned to speaker shattering effects. “Daydreamin” is a bit of an odd inclusion. I suppose it’s the best of the singing songs in the Kurtis Blow catalog, so it allows that side of him to be showcased. Again, this is a song that I probably never listened to in full before today probably and I see why it wasn’t my thing then, but I can recognize now that it’s a decent track.

From the 4th album the title track is included. “Party Time” is Kurtis Blow’s tribute to the growing Go-Go scene out of Washington DC. He uses a few different styles on this one. He starts off with a little information on the Go-Go scene, then he goes in to a short bit that is reminiscent of choruses from “The Breaks” and “Tough”. Next up is some slight speed rapping followed by some Go-Go styled call and response that leads into a long bridge. This song is also the source for Beastie Boys “Hey Ladies!” vocal sample**.

Arguably, “Ego Trip” is Kuris Blow’s best album. “AJ Scratch” is an excellent track about his DJ of the same name and “Basketball” certainly needs no explanation. The rhyming on both tracks is solid, but the most memorable portion of these songs is the powerful sung hooks. “8 Million Stories” is perhaps the hardest-hitting track on this album, not to mention his career. In the production you can hear traces of the sounds of Run-D.M.C and The Fat Boys, both of which Kurtis Blow was involved in.  There are DMX drums, heavy guitars, and the big bright pianos of Don Blackman of Twennynine. The surprise here was the guest vocals by Run-D.MC. It wasn’t all that common for artists to have features in this time period. It did happen, but I can only think of it occurring with labelmates before***. This track is also formatted differently than the standards of the time. To introduce Run-D.M.Con the song, they take the break to set up a skit as if they randomly run into each other the street and then exchange some dialog before they jump into their verse. That leads to a very long bridge that builds with Kurtis Blow narrating a story about a street cat named Fresh Kid and the talk eventually explodes into a verse telling the story of his rise and demise.

“I’m Chillin” is from his Kingdom Blow record and it is the only Kurtis Blow album I don’t have (I have them all on vinyl). Reviewing all of this material makes me curious about hearing this album. It does feature a guest appearances by Bob Dylan and George Clinton, plus Production from Salaam Remi.

This compilation ignores the second and final album; “Deuce” and “Back By Popular Demand”. The last album being omitted is understandable as he was past his prime by this point and Hip Hop had advanced so much, particularly lyrically (eventhough he did have some rhymes written by Def Jef, it still didn’t sound natural for Kurtis Blow).  However, “Deuce” has a few good joints on it worth including.

Basically, this “Best Of Kuris Blow” CD will give you a nice overview of his MC career, but at some point someone needs to release a more in-depth and more inclusive option to cover the missing key moments like; “Nervous”, “Take It To The Bridge”, “Getaway”, “Juice”, “AJ Meets Davy DMX”, “Rappin’ Blow Part Two”, and “One Two Five (Main Street Harlem USA)”.

*He almost parlayed that opportunity into the forming of the Furious Six.

**Reading the “Party Time?” album credits I also was reminded that Full Force are credited for Background Vocals and Vocal Arrangements. This was before their releases with U.T.F.O, which would blow up the following year with “Roxanne, Roxanne”.

***Sugarhill Records had their artists work together a few times, presumably as a means to piggyback sales. They had “Rapper’s Reprise” with Sugarhill Gang and Sequence, “Monster Jam” with Spoonie Gee and Sequence, and “Showdown” with Furious Five VS Sugarhill Gang.

Bonus Note: This article doesn't even cover all the first that Kurtis Blow is often given credit  or takes credit for. I agree some might be debatable but he is definitely a pioneer of these things. Here's a few that I have heard mentioned before. They main ones that could be debatable are B and C...

D)First Rap artist to do a Sprite Commercial 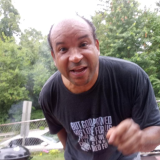 I Would Like To Have A Copy Of This Kurtis Blow Ego Trip Album And America, Party Time On CD.